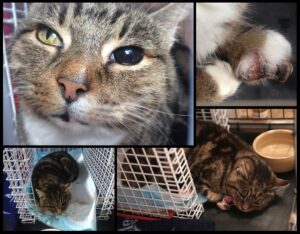 This is Elsa, who came into our care yesterday with a badly injured foot.
We had initially trapped and neutered her as part of a feral colony in February 2017. The cats were re-released to the garden of the couple that had been feeding them as they were eager to have them back.
A few months ago Elsa appeared with a severe foot injury which was thought to be the result of an accident but unfortunately she refused to go near a trap for the second time.
Her paw kept bursting open and bleeding and she couldn’t walk on it, but catching her proved impossible. It didn’t help that 4 other feral cats lived in the same garden, waiting for food.
We advised the lady to only feed Elsa inside a cat carrier, which took quite a while to establish. One failed attempt spooked her, causing her to disappear for days and losing trust in her feeders.
Yesterday Elsa was brave enough to go almost all the way into the carrier for the ham she loves so much and the lady managed to quickly close the door on her. Such a relief!
Poor Elsa must have been in so much pain all this time. She is clearly tired and fed up and can no longer be bothered to be feral. To our amazement we were able to stroke her and apply Advocate. Our vet suspects the weird deformity on Elsa’s paw could be a giant cell carcinoma (cancer) rather than the result of injury.
The claws of her remaining 3 toes had grown so long that they were deeply embedded into her toe pads. Elsa was really good and let us clip them, which caused a lot of bleeding.
For now she had a long-acting antibiotic injection and pain relief.
We have an appointment next Friday for bloods, x-rays, amputation and a much needed dental (her teeth are in a terrible state). If the x-ray shows no bad surprises the remnants of Elsa’s “thumb” and “index finger” will be removed all the way to her wrist, allowing us to save her leg. We will also have a closer look at her eye, which is hopefully just pigmentation.
Please keep everything crossed for our brave little girl

Needless to say that she will remain in our care for the rest of her life from now on.